IOC has been forced to soften their stance for 2020 Tokyo Olympics, allowing athletes to protest before the start of the competition but not on podiums

U.S. athletes Tommie Smith, center, and John Carlos raise gloved hands skyward during the playing of the Star Spangled Banner after Smith received the gold and Carlos the bronze for the 200 meter run at the Summer Olympic Games in Mexico City, 1968. Photo: Twitter

Should sports and politics mix? Prior to the 2020 Tokyo Olympics, the International Olympic Committee (IOC) didn’t think so.

While footballers and American basketball players routinely “take the knee” before matches to exhibit solidarity towards the ‘Say No to Racism’ campaign, IOC chief Thomas Bach prefers athletes to avoid controversies.

The German, a former Olympic fencing champion, says the motto of the Games is to propagate sporting excellence.

His viewpoint contrasts sharply with several prominent athletes who think, through their elevated status as icons and in an era of renewed athlete activism, they can bring about a change in society.

The IOC has, at times, struggled to enforce Rule 50 of its Olympic Charter, which states: “No kind of demonstration or political, religious or racial propaganda is permitted in any Olympic sites, venues or other areas.”

And the global governing body has been forced to soften their stance for Tokyo, allowing athletes to protest before the start of the competition but not on podiums, which is being viewed as an attempt to limit political demonstrations from hijacking the headlines.

That should be music to the ears of Ankie Spitzer. The 75-year-old is in a tussle with the IOC for almost half a century over the demand of a tribute at the Olympics in the honour of her Israeli fencing coach Andre and 10 others, who were slain by Black September gunmen at Munich 1972.

Though it is yet unclear whether her wish for a minute’s silence would be granted or not for the ‘Munich Massacre’, she has been personally invited by Bach for the 32nd Games’ opening ceremony, to be held on Friday.

“I am hopeful that we are going to hear what we have been waiting 49 years for,” Spitzer told British daily the Times. 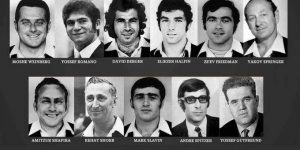 The 11 Israel squad members who were killed in the 1972 Olympics. Photo Credit: Twitter

The invitation is being viewed as IOC’s attempt to heal old wounds and chart a more moderate path on a tricky subject.

Spitzer claims Bach told her that the IOC plans to do ‘something creative’ in respect to the memory of the murdered athletes.

“I told him not to be creative, but finally he should do the right thing,” the Times quoted Spitzer as saying.

While the inclusive gesture could deny athletes a chance at ‘headline-grabbing’ but IOC’s attempt at controlling the narrative could get delicate.

Signs of sparks are already visible, as earlier this week, the South Korean team were ordered to remove flags that referenced a 16th-century admiral who defeated a Japanese fleet.

He has previously ‘raised his fist’ in a race in Monaco, referring to the ‘Black Power’ podium salute of 1968 200m champion Tommie Smith and bronze medallist John Carlos in Mexico City.

Smith and Carlos were kicked out of the Games, effectively ending their track and field careers, and shunned by the general American public for a long time. 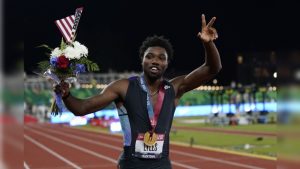 Noah Lyles celebrates after winning the final in the men’s 200-meter run at the
U.S. Olympic Track and Field Trials on June 27. Photo Credit: AP/PTI

The same fate also fell on Australian Peter Norman, the silver medallist in 200m in 1968, who shared the podium with Smith and Carlos wearing an ‘Olympic Project for Human Rights’ badge. Norman was refused entry into the 1972 contingent despite qualifying.

The Australian government offered a posthumous apology to Norman only in 2012, six years after his death. And it is only now that their stance is being viewed in a kinder light.

But not all athletes are on the same page as Lyles.

The IOC Athletes Commission said in April that 67 per cent of 3,500 athletes believed that the protests on the podium were inappropriate, Around 70 per cent also don’t want it to happen on the field of play.

American hammer thrower Gwen Berry reckons no efforts could stop athletes from protesting at the Games if they wanted to.

History and the IOC would judge them kindly and might even laud them for being humane.

A brief look at the history of protests:

Sailors Vishnu, Nethra at 22nd and 33rd spot after 6 races