The robot is about to make a trip on Mars.

NASA’s Perseverance Rover has started its most awaited science campaign on Mars. The Perseverance rover had landed on Jezero Crater on 18 February 2021.

The six-wheeled robot’s first few months on Mars was spent performing various health and instrument checks. It even documented NASA’s Ingenuity helicopter which had travelled to Mars on the rover’s belly.

Now that NASA’s main mission is over and needs no supervision. The Perseverance rover has begun its mission, which is searching for signs of ancient life on Mars and collecting as many samples as possible to bring back to Earth.

This happened on June 1, when the rover moved away from its landing site.

Jennifer Trosper, who is the new Perseverance project manager at NASA’s Jet Propulsion Laboratory (JPL) in Southern California stated that they (the team) was putting the rover’s commissioning phase as well as the landing site on their rearview mirror and were moving on.

The statement further added that by the next few months, the rover will start exploring a 1.5-square-mile patch of the crater floor. The statement also clarified that it will be from this location that the first samples from Mars will be collected.

The Perseverance rover will be exploring two distinct geological units within that patch — “Crater Floor Fractured Rough,” this site contains a lot of ancient, exposed bedrock. While the other site, “Séítah,” has bedrock as well but also boasts of ridges and dunes, as its other features. 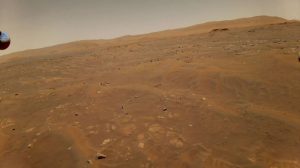 This image captured shows Séítah geologic unit on Mars which was taken from the height of 33 feet by NASA’s Ingenuity Mars helicopter during its sixth flight, on May 22, 2021.
(Photo credit: NASA/JPL-Caltech)

Astrobiologist Kevin Hand, who is the co-leader of this science campaign along with fellow JPL scientist Vivian Sun laid out the plan in their statement that to do justice to both the units in an allotted time, the team came up with the Martian version of the old auto club-style map. 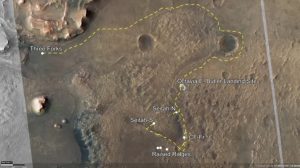 They further added that if everything goes according to plan, the rover should be able to collect and store at least one or two samples from all the four locations, which according to the team would be the best capture in the history of Jezero.

After covering all the areas the rover will head back to its landing site, which the mission team has named Octavia E. Butler after a famous sci-fi author. The nuclear-powered rover will then roll north and west towards the site of its second science campaign which is Jezero’s delta.

On Earth, deltas are known for preserving organic compounds and signs of life, so the team wants to know if it is the same on the Red planet too.

Perseverance’s mission is expected to last at least 687 Earth days.