The spacecraft flew closer to Jupiter’s largest moon, Ganymede. This happened for the first time in more than two decades and offered glimpses of the icy orb.

First look at images taken by NASA’s Juno as it sailed past Ganymede. (Photo Credits: Space.com) 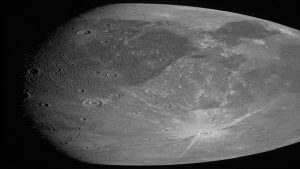 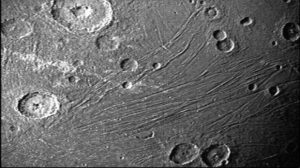 These two images from NASA Juno’s June 7, 2021, flight which took off from Earth to Jupiter’s giant moon Ganymede have been received on Earth. The photos – the first one is from the Jupiter orbiter’s JunoCam imager while the other one is from its Stellar Reference Unit star camera. These images show the surface in remarkable detail, including craters, clearly distinct dark and bright terrain, and long structural features possibly linked to tectonic faults. 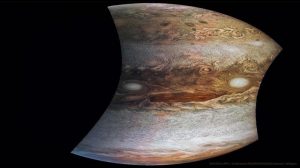 A face in the clouds of Jupiter from Juno.
(Photo credits- NASA/JPL-Caltech/SwRI/MSSS)

Scott Bolton of the Southwest Research Institute in San Antonio who is also the Juno Principal Investigator said that this is the closest any spacecraft has come to Juno’s moon.

Ganymede has always been an interesting world for scientists to look at and study. But due to a lack of resources, this mission never took off. Despite the place’s standing, the moon is larger than the planet Mercury and also has many interesting features like- it is the only moon to have a magnetic field, it also has a bubble of charged particles called the Magnetosphere.

How were pictures taken?

Using a green filter, the spacecraft’s JunoCam visible-light imager captured one side of the water-ice-encrusted moon. Later, when different versions of the same image came down incorporating the camera’s red and blue filters, imaging experts were able to provide a color portrait of Ganymede. The image resolution is about 0.6 miles (1 kilometer) per pixel.

In addition to this Juno’s Stellar Reference Unit, a navigation camera also clicked pictures. It provided a black-and-white picture of Ganymede’s dark side (the side which is opposite to the Sun) which was bathed in dim light scattered off Jupiter. The image resolution is between 0.37 to 0.56 miles (600 to 900 meters) per pixel.

The spacecraft will soon be sending in more pictures eventually. These pictures are being taken by Juno’s Cam.

Future missions with this Ganymede:

Many space organisations, including the European Space Agency’s have been eyeing Jupiter’s Icy Moons. Explorer mission, which is also known as the JUICE is expected to launch next year but the spacecraft will be arriving on Jupiter by 2029. This is too long a wait since Juno had already been launch in 2011, this spacecraft is expected to be carrying more powerful technology than what the previous spacecraft did.

The scientists are very excited to make use of this opportunity. The spacecraft will be carrying various instruments which will help collect data. These instruments would include different cameras which would also include the Juno Cam, radio instruments, the Ultraviolet Spectrograph (UVS), the Jovian Infrared Auroral Mapper (JIRAM) instruments and the Microwave Radiometer (MWR).
Since the icy moon will only appear for 25 minutes and would then fade. Scientists say that the cameras would only be able to take five images of the moon.